What Doesn’t Exist Yet: An Interview with Xiaoxiao Xu

The Chinese-Dutch photographer Xiaoxiao Xu takes tranquil images that make the viewer wonder if there’s more going on than what you see at first sight. Typically shot in square format, her photos cover varying topics: from her own childhood memories, to a pet show in a small Dutch town, to Chinese farmers who build their own aircrafts using household equipment. In this interview with GUP, Xu speaks about finding her subjects in remote areas, the power of a quiet image, and how people (and animals) move her.

Xiaoxiao Xu (b. 1984) lives in a quiet neighbourhood in Zwanenburg, just outside of Amsterdam. We drink tea while sitting around a coffee table that’s holding large piles of envelopes. In the envelopes are copies of Aeronautics in the Backyard, Xu’s third photobook. When she enrolled at the Amsterdam Photo Academy at age 22 without any experience in photography, she hadn’t thought that her work would one day be received so well. She moved to the Netherlands as a teenager, and was homesick for years. Still, it wasn’t until she did her final project at the photo academy in 2009 that she returned to China to photograph the area in which she grew up. 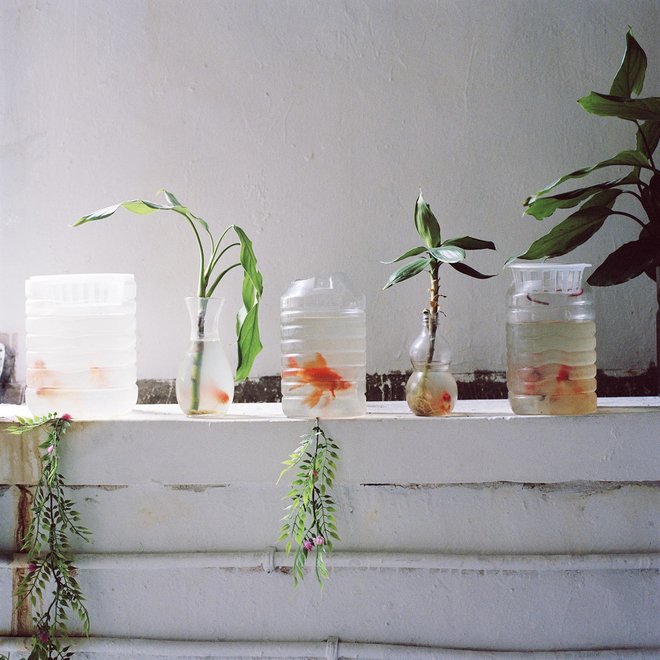 You’ve said that when you visited China after ten years, it was overwhelmingly emotional for you. Yet the resulting book, The Way To The Golden Mountain, is very calm-looking. How do your intense emotions correspond with the quiet images?
I don’t like photos in which a lot is happening. I want to be able to take my time to look at just one thing. I sometimes regret that we think that we can see everything at first sight, because what we see then, is more like scanning, and what we scan for is learnt. It depends very much on the background and culture you’re from. It’s like in language: if people want to express their ideas quickly they talk in clichés. In order to prevent such clichés, I actually prefer silences to talking. In the same way, I like emptiness in images.
But that’s just what I like. I had never expected that The Way to the Golden Mountain would be received so well. Maybe the photos worked in the way that I hoped: that viewers looked beyond that first impression, and sensed that there was more going on than simply the depicted scenes. After all, I had missed China a lot, and maybe that emotion is somehow present in the photos

For some time now, you’ve mostly shot square format images. How did that start?
The Hasselblad is analogue, which fits my way of working. I always observe first, and if the right moment is there, I click the shutter. Because I don’t know what’s on the film, I always draw what I photographed. That way I have an idea of what I did, and what I’m still missing. Sometimes, only by looking at my drawings, I know: I have to shoot more portraits, there are too few of them in the series. Sometimes I really have to push myself to take portraits. 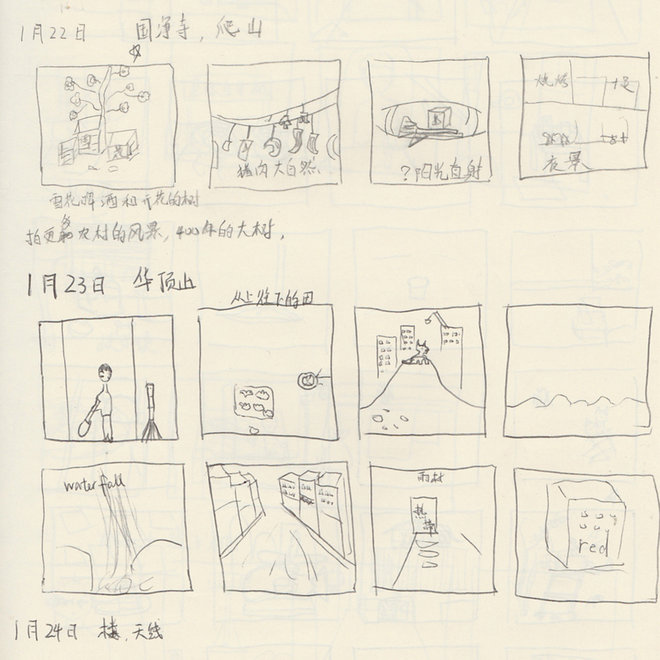 You do often portray animals.
[Laughs] I wondered about that too! When I look at my work, I think: Oh, many animals. And especially captive animals. I felt locked up when I moved to The Netherlands, so that theme of incarceration has been on my mind for sure. But also, I like animals a lot. They touch me, maybe because they often look a little lost. I think I cry about animals more easily than about people. 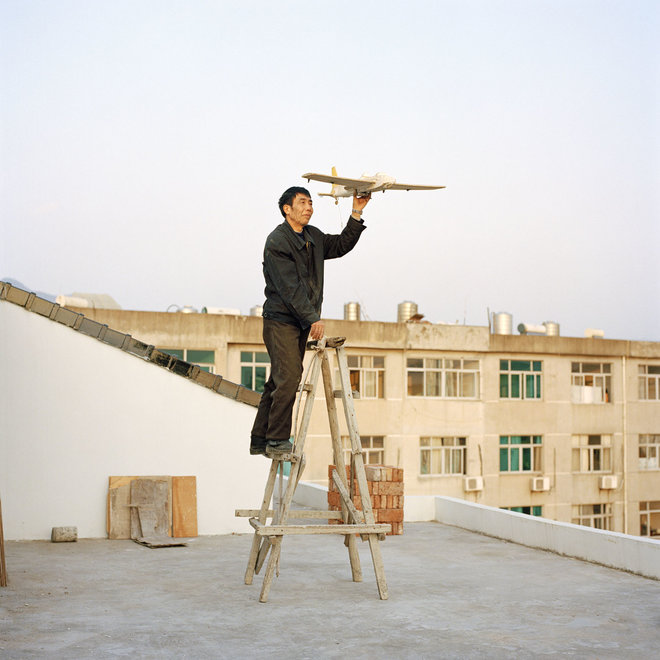 You also did many portraits in your newest book Aeronautics in the Backyard, for which you photographed men who build one-person airplanes with household equipment, hoping to one day fly in a plane of their own making.
I enjoyed portraying these men a lot. They pose with their dearest possession, the airplane that they’re building, and that reflects directly on the way they look. They want to share their story with you, so they’re already absorbed in their own world, and not easily distracted. That’s an ideal situation for a photographer, the only thing I needed to do was be there and click the shutter.

The men in Aeronautics live in distant villages. How did you find them?
That was the hardest part of the project: finding these men. I had found some articles online that mentioned a few names and locations. With that information, I called, for example, the local newspaper or tv station to find out more. But sometimes I simply went to a village, and I asked passers-by: “Do you know Mr. so-and-so?” That’s how I found out where Mr. Yuan lives. I arrived at his house unannounced, but when I told him what I came for, I was welcome to stay a few days with him and his family. 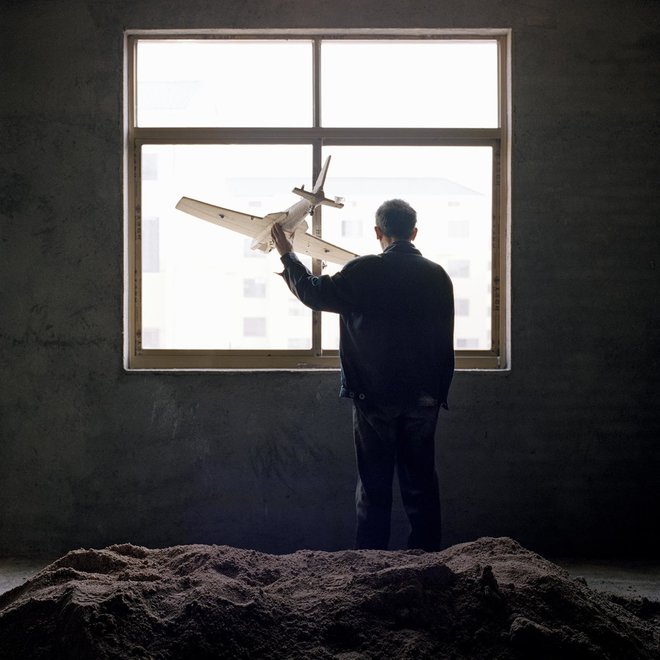 You took a photo of Mr. Yuan in a room in which there’s also a large pile of sand. How did that pile of sand get in that room?
People in China, if they can afford it, build houses of five, six, seven floors, because that gives them status. Mr. Yuan also has a house like that. But his family only occupies the first two floors, which is enough for them. They haven’t finished building the other floors, and that’s why the pile of sand is there. At a certain point, Mr. Yuan pulled out a small airplane and told me that his son makes small airplanes and that this was a present from his son. That’s when I took the photo. I liked seeing that grown man with a small airplane in his hands in that weird looking room.

For most people, it might always remain a dream to fly

You call what these men do ‘a revolutionary way of making new techniques’. What do you mean by that?
They’re not creating technical breakthroughs, but I think it’s revolutionary in the sense that they’re trying to do something that’s outside of their reach. For example, Mr. Zhang from Canton is building something that doesn’t exist yet. He is designing a helicopter that can be of aid during earthquakes. In order to do that, a helicopter should not get stuck between the trees of a forest, and be able to fly for a long time. That’s why he designed a round helicopter, with extra motors, that are positioned at the top of the helicopter.

Do you think he’ll be able to fly with this new helicopter?
In the short run, no, I don’t think so. Some people that I met managed to fly in the airplanes that they built, but not all the builders have reached their goal yet. Others were able to fly for a little while, but had technical problems and got injured. For most people, it might always remain a dream to fly. Maybe also for Mr. Zhang, I don’t know. But I admire his spirit, that he wants to build something that he believes in and that doesn’t exist yet. I think that’s beautiful. 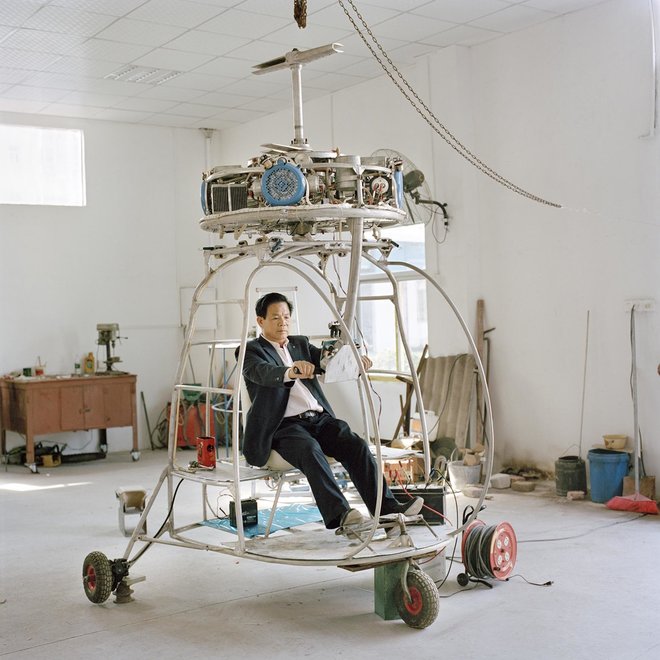 Xu’s book Aeronautics in the Backyard can be purchased here.

Xu’s series Holga Circus and Champion Show were published in GUP #31 and GUP #34, respectively.
View more of Xu’s work on her website.