Pull down thy vanity: An interview with Letizia Battaglia

Letizia Battaglia (1935) is a woman who never fails to leave a lasting impression on the people she meets. The Sicilian photographer made her living capturing photos of mafia victims in her home city of Palermo in the ‘70s and ‘80s, facing death threats and intimidation on a daily basis. She was however, never swayed from her duty to expose the mafia, supporting honest politicians and anyone who stood against the organisation. She still takes photographs, though she has shifted her focus away from the mafia, travelling the world, despite her advancing years, to show others her much loved, however imperfect, home. Her work is currently on exhibit at Ron Lang Art in Amsterdam, with a selection of some of her less-known photographs, encompassing more optimistic subjects, such as the women and children of Palermo, highlighting a ray of hope in an island overrun by corruption.

Battaglia’s strength is visible from the moment you lay eyes on her, a defiant air surrounding her as much as the constant cigarette smoke floating through the room. Her voice is deep and rough, no doubt due to a lifetime of smoking, and she speaks slowly and with purpose, not wasting her breath on anything trivial. Sometimes she tries to speak English, but often reverts back to Italian, allowing the gallery owner to translate, prompting him hurriedly when she is ready for a break in speech. 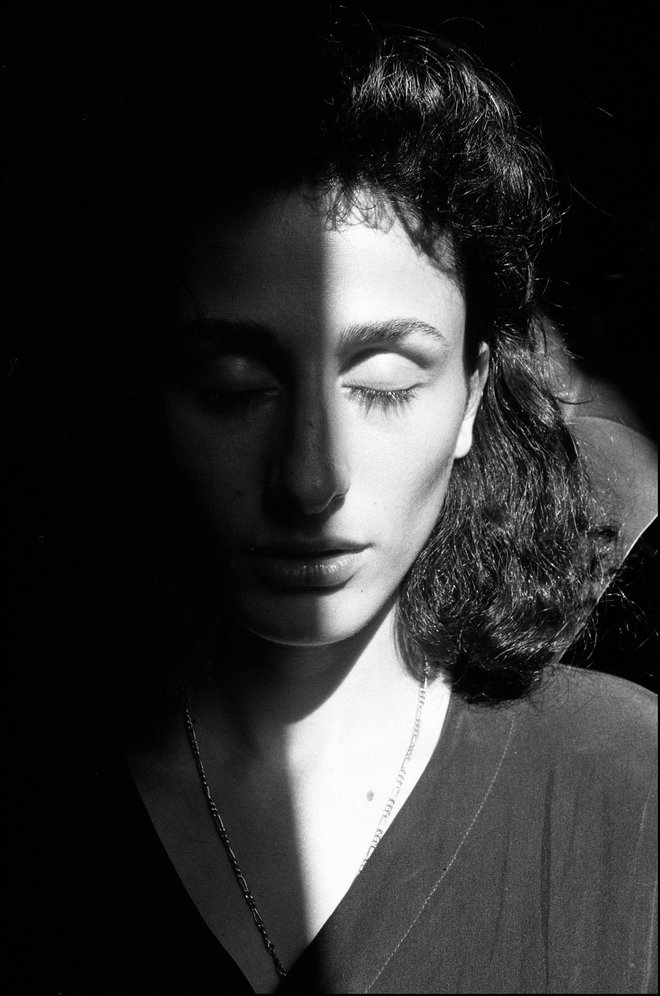 Even as we start, I sense she has very little patience for me, which only worsens as the conversation continues, first when she asks for a light and I tell her I don’t smoke, second when it is discovered I speak no Italian and third, the final nail in the coffin, when I tell her the interview is planned for online publication and not print. I hear her utter the word ‘basta’ frequently in an irritated tone, and decide it can’t be good, later to discover it means ‘enough’. One can see why she isn’t well-accepted in Sicily, the macho-culture that expects women to be good, obedient, feminine wives, while everything about her exudes a big middle finger to the system.

Most people who encounter Battaglia (appropriately, the Italian word for ‘battle’) are fascinated by her associations with the mafia and of course, it is a complicated and enthralling subject, but it is also something that she is tired of talking about, which, with an eye-roll she makes clear to me after my first couple of questions. Her interpreter swiftly changes the subject, moving on to the photographers who influenced her work.

Initially a journalist, Battaglia became a photographer out of necessity, to get more money for her articles for Italian newspaper L’Ora. But, she grew to love the medium. “Diane Arbus is my role model,” she says. “I don’t like the French photographers, like Cartier-Bresson. I prefer the American style.” One can see the similarities in the work of Battaglia and Arbus: non-judgemental portraits of outcasts and those who are isolated from mainstream society.

Like Arbus, Battaglia feels an affinity with those who are shunned from the rest, as she was herself isolated from other residents of Palermo, partly through efforts of the mafia and partly through others’ fear of being associated with her. When I mention the strong emotional connection she has with her images, she says: “Photography can only be good if the artist’s life and images are one”. Her work was shown in Italy in 2012 alongside the self-portraits of Francesca Woodman, who committed suicide at 23, and she enjoyed the differences and similarities between the two of them, both feeling out of place in the world. Woodman’s youthful oevre is a far cry from Battaglia’s maturity, but their work shares a similar emotional charge, full of conflict and turmoil, despite the subject matter itself being quite different.

After photographing director Pier Paolo Pasolini at a debate about free speech, Battaglia was inspired to create a series called The Invincibles, focusing on portraits of people who have inspired her and creating collages from them, including Che Guevara and Jesus Christ. “I’m not religious, but these photos are all of people who were killed”, due to their beliefs. “Pasolini was against the system, a liberal and the first well-known openly gay man in Italy. I keep his book by my bedside, with the works of poet Ezra Pound” (whose mind was ‘killed’ in a mental institution). She is horrified when I tell her I don’t know his poems and halts everything to makes me look up online and read from Canto 81: “The ant's a centaur in his dragon world. / Pull down thy vanity, it is not man / Made courage, or made order, or made grace, / Pull down thy vanity, I say pull down.” When I finish, she seems satisfied by my rendition. “It sounds better in English,” she muses fondly, almost out of place as the most positive reaction I would receive in our short encounter. This, she says, is her guide for life, reminding her to remain humble, in her place against many others

Despite being inspired by the men mentioned above, in her work Battaglia is mostly concerned about women. “I don’t give a shit about men,” she states. “It’s all about women. A better life can only come from women and children; older men are the ones always putting guns into the hands of the innocent.” A particularly lively image shows a young woman in her white wedding dress, captured in a frustrated tantrum, fists obscured by their swift movement. Battaglia describes that, “she was the wife of a Mafioso and she was angry because her dress got caught in the door of her car.” Despite the woman having close connections with the organisation Battaglia hates most, she admires the image, the strong will of the bride emanating from the print. Later in her career, she also combined her old journalistic images with female nudes, “removing the arrogance from the photographs. I was obsessed with the images and wanted to burn them,” but this process was cathartic, it “switched the focus from death and the mobster to something beautiful,” without destroying the memory. 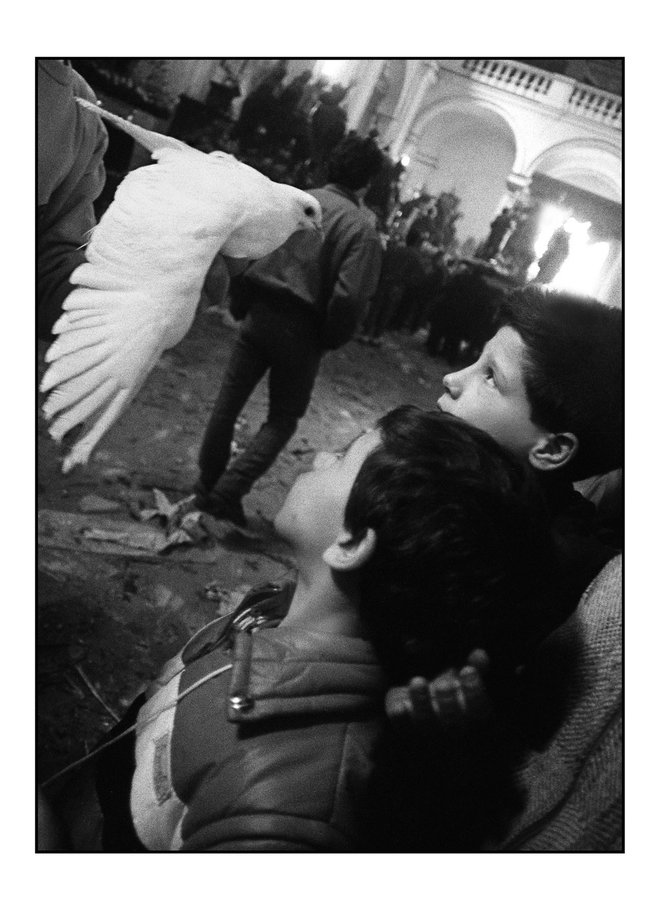 Transforming something violent, harrowing and painful into something beautiful is exactly what this selection of Battaglia’s photographs, on exhibit at Ron Lang, does. The images often contain the same subjects seen in her more famous prints, but they’re portrayed in a lighter, more care-free attitude. One example shows a teenage girl, made famous by Battaglia’s photo of her leaning against a door, holding a football and looking angrily into the camera, but this time, she’s laughing, throwing that same ball into the air. It is impossible not to think of the mafia when you see them, as Battaglia says, there is no difference between these images and those of blood-soaked victims, “they are all the same,” but these show normal life in Sicily, everyday banality that is in some way refreshing and graceful.

Though the photos are optimistic and full of dreams, Battaglia says she has no hope for the future of Palermo. I want to ask further questions, eager to learn more about her stint as a politician, which she considers a great failure, or the woman’s magazine she co-founded, but she tosses out a short “finito” to herself, signifying that the interview is over. The gallery owner stands up abruptly, apologising for her: “She is tired from the previous interview, you must have had similar experiences with other difficult people”, and I’m ushered out of the gallery. In a last glance at the photos, I notice that it is surprising to see such softness in photos from a woman who seems incredibly harsh, a tactic no doubt adopted in order to survive, her temper short and voice authoritative. Battaglia is now 80 years old and not in the best health (for much of the interview, gallery staff are making phone calls on her behalf, to arrange picking up her medicines). Yet, despite this, she shows no sign of slowing down – after our meeting, she was off to a lunch in her honour, for which she was purposefully late, she likes it that way – and will continue to fight for her cause through harrowing and tender photographs, for as long as she possibly can.

Letizia Battaglia’s photos are on show at Ron Lang Art in Amsterdam until December 18, 2015.