Everything of value is vulnerable: An interview with Ulay

Frank Uwe Laysiepen, known as Ulay (1943, Germany) is a performance artist and photographer most famous for his 12-year collaboration with fellow artist and former lover, Marina Abramović, but also for his enduring love affair with Polaroid photography. Since the late ‘60s, Ulay has been working with this instant medium, exploring themes such as gender and politics, while pushing the boundaries of what is possible with an instant camera and leading the research on Polaroid conservation. The self-professed modern nomad has always been wary of showing his work, aware of how perishable they can be, but has come together with the Nederlands Fotomuseum and the Rabo Art Collection to show a retrospective of his 45 years in photography. In this interview with GUP, Ulay discusses his impatience with photography, searching for his identity and the splendour of water.

You don’t consider yourself a photographer and yet, the majority of your work is photographic. Why is it that you chose to work with this medium?

First of all, I don’t have the patience to try to produce a superlative image. Classic photographers would depict a particular place and wait until something extraordinary happened, then they would click. I’m actually a direct ‘snapshotter’, but of particular situations. I moved to Amsterdam in 1968 with only my camera, a typewriter and a borrowed car, and Polaroid turned out to be the perfect medium for me, because you have the studio, darkroom and printer in one. I believe that using Polaroid is the closest I can get between my ideas and the reality, because it is instant: there is 60 to 90 seconds between the act and the image. The first thing I did with a Polaroid camera was something I called a ‘gift exchange’. I took a lot of photos of myself, but also of others, and when I made a picture of someone else, I gave it to them. It made both of us happy, it was a social medium. Not to be confused with Instagram.

If you look at my Polaroids, they’re not exactly what we expect from formalist, aesthetic imagery and I think that’s the strength of my work

I worked for Polaroid in the ‘70s and had unlimited access to the film and used these manual cameras that were so good, you didn’t need a flash. Almost everything I made was shot on a handheld camera, without flash, either pointing at myself (Auto-Polaroids), or pointing it at other people. It’s such straightforward photography. If you look at the small Polaroids, they’re not exactly what we expect from formalist, aesthetic imagery and I think that’s the strength of my work and it suits my character, being a nomad. There was a film made about me by Marjolein Boonstra called Ulay in Photography and it’s an amazingly beautiful film. The proper English would be Ulay ‘on’ Photography, but I’m ‘in’ photography: that’s my attitude.

How have you had to adapt your work since Polaroid stopped production?

Polaroid became bankrupt not because the product wasn’t good, on the contrary, but because they started thinking of the digital market too late. Now, I have two options if I want to make an instant image: Fujifilm’s Instax cameras, the cameras are ugly but the film is good, the colours are sublime. Or, something called The Impossible Project, but the film isn’t good. I wonder why Impossible never hired spies to see how Fuji make their film.

I don’t make photographs anymore, but in 2015 I made my last series with original Polaroid film. The old boss in New York had some original film he had saved for 12 or 13 years after the bankruptcy. But now, it’s all gone.

Some of your Polaroids are over two metres tall. How do you create them?

I never worked in a studio, but in the late ‘70s, Polaroid developed a one of a kind camera that was three to four metres high and could make ‘Polagrams’ that were 240cm tall. It was comparable with a black box with a huge lens and lots of flashlights. This camera was first used to create 1:1 pictures of famous paintings because they thought Polaroids had a longer expiration date than the paintings – now we know it is the other way round. I was one of only four artists in the world who was allowed to work with it and I probably used it the most.

I do not engage artificial lights apart from the large Polaroids, it’s something that you have to use a studio for. With these it’s different: when I go inside the camera – and I do go inside the camera – it is not photography anymore, it is exposing a negative through flashlights, colour filters, body parts, etc. and you imprint it. It’s a photogram actually. Polaroids are unique, but these large-format ones are now even more precious, because the camera itself was destroyed in 2002.

This one, Self Portrait, is my favourite image. I was always worried about my work getting damaged and you can see this one is a little disintegrated, you see the blacks are a little purple now. The light here [in the exhibition] is very important, it has to stay under 50 lumens because any higher will damage the photographs, but I learnt from Charlie Chaplin how to store my work. They are all kept in airtight containers I had specially made, so there are photographs here that are 45 years old still in perfect condition.

You made a lot of work questioning your identity, particularly whilst playing with the concept of gender. Is this something that you are still working on?

Well no, obviously not… [Ulay strokes his beard] Well, the long hair could still fit, but not the beard. You see, I was an orphan at the age of 15, I had no family, I had no grandparents, no brothers or sisters and you get to that age where you ask ‘who am I?’ and there is nobody there to answer. So I performed in front of the camera in all directions: gender clash, male and female, relating to anima and animus, I did a lot of self-mutilating stuff, because photography by nature always stays on the surface of things, and I wanted to go deeper in order to find my identity. So, I cut myself, tattoos, transplantations, piercing, all of these, to get under the skin, where the photography stops.

I cut myself, tattoos, transplantations, piercing, all of these, to get under the skin, where the photography stops.

For a period of five years, I was lending myself to find out about identity. I made thousands of Polaroid photographs, and at one stage, I thought: ‘this is endless, you can go your whole life taking portraits, manipulating in all directions, but you don’t get the answer.’ Then I did something called FOTOTOT (Photo Death) and made exhibitions of large black and white photographs on light-sensitive paper. When the audience had assembled, we shone a halogen light on the work and the image was gone within 10 seconds. Where does the image go? It’s like a candle, where does the light go when you blow it out? From then, I engaged totally in performance, it is the most direct you can be with an audience. The body is the medium par excellence, full stop.

But you also returned to photography later.

Yeah, well, I managed and organised all the photography and video recordings of myself or together with Marina [Abramović] for the most intensive period of performance from ’76 to ‘80 and then later till ‘86, ‘87. I had actually had enough of performance and wanted to go back to photography, because there was so much I hadn’t touched in the medium. I wanted to go back to prove to the world that analogue photography is not exhausted yet, even when we became confronted with the enforced digitalisation of things.

Since then, your work has shifted from focusing on the body, specifically yours, to new subjects, such as water and its importance in sustaining life. Why this change? 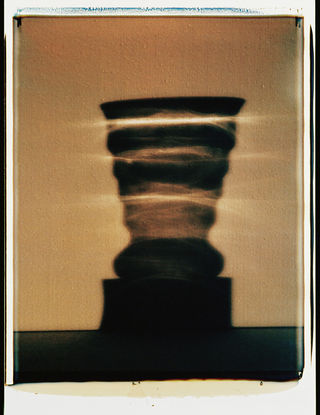 We all know that our body consists of about 70% water and mind you, our brains, 90%, so we are definitely water creatures, born on a water planet. I tried to substitute the idea of performance with water and I created a website called Earth Water Catalogue where I approached artists from all over the world to contribute to the site with a photograph, video, sound, writing, whatever. I did installations and works in Israel and the West Bank under the title ‘Who’s Water Is It?’ where I addressed multinationals who privatise water. You know, if you mention the word ‘water’ to the people of Israel, it’s like a bomb, immediately it is politicised. Before I wanted only artists on the website, but now it is open for everybody and I may do some more performance work soon on the theme of water.

How do you capture this concept of water in such an immediate medium as Polaroid?

It’s not easy. If you go on the Google search machine and type in ‘drinking water’, you get 30 million responses in less than one second, so you better learn to swim! It is very difficult, but there are quite a number of artists who have been working with water, of course Olafur Eliasson is one of the most known, he does the most spectacular water projects. You have to focus in order to grasp something that can express the banality of water, the splendour of water, the carelessness of water, so there are a lot of angles.

I went to Patagonia, I travelled almost 8,000km through the Andes, in search of clouds, water, glaciers and icebergs and it resulted in an amazing reportage that was shown in Amsterdam. I made everything with a mobile phone, but pointed the camera through a Leica binocular. They are beautiful images, but also a little abstract, so you think ‘what is this about?’ It depends what twist you put on it. You know, water can be very boring and it’s not sexy, but it can be beautiful and spectacular.

Ulay | Polaroids, in partnership with the Rabo Art Collection is on show at the Nederlands Fotomuseum in Rotterdam until May 1, 2016.